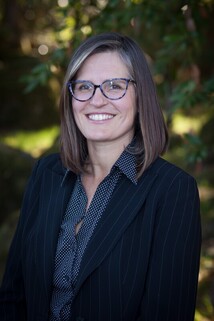 Dr. Scott has served as Program Director since June 2017. She is a native of southern California who came north to college at Berkeley. Originally drawn to the arts, she received her BA in the History of Art and spent her early post-graduate years teaching special-needs children and adults with an emphasis on art and creativity. After a volunteer position at Children's Hospital in Oakland propelled her towards a career in medicine, she completed a post-baccalaureate program at Mills College in Oakland and attended Harvard Medical School. She happily returned home to Northern California to complete residency in Family Medicine here in Santa Rosa.
Following graduation from residency, Dr Scott worked in multiple community health centers, urgent care centers and emergency rooms throughout Sonoma County but soon gravitated back to the residency community of the Santa Rosa Family Medicine Residency. She joined the faculty in 2007 and served as an Associate Program Director for many years prior to becoming the Program Director.

Dr Scott’s passion project has been the development of a 2-week curriculum for interns at the end of their PGY-1 year known as “Eatership.” The organizing principle of the course is that the majority of disease that we treat as Family Physicians is either directly or indirectly impacted by our food choices and the food environment. The course explores the science and politics of the food system through small-group discussion, films, community activities, self-directed research, cooking and creative expression. She considers this to be her true revolutionary work.

Dr. Scott is dedicated to working with un- or underinsured populations. She is fluent in Spanish and practices and teaches Family Medicine at the Vista Family Health Center and Sutter Santa Rosa Regional Hospital. She also teaches colposcopy and is one of the program’s TEACH trainers, overseeing residents in our pregnancy options clinic as well as at Planned Parenthood.

​Outside of work, Dr Scott is an avid commuter cyclist and can often be seen around town on her cargo bike. She loves to eat and cook local food for friends and family, sew and work in the garden. Along with her partner, Travers, and son, Theo, she spends time in the outdoors as much as possible.
Alumni Year: 2005
3569 Round Barn Circle, Suite 200, Santa Rosa, CA  95403  (707) 583-8806
© Copyright 2022, Santa Rosa Family Medicine Residency